During the late 1920’s, several Whitefish residents, headed by D.P.Dedon, bought 104 acres of land west of Whitefish for $1600 so that they could build a golf course. 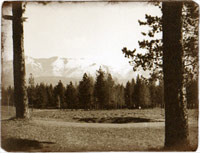 In those days money was hard to get, and the course development became a slow process.  These hard working people had cleared the land for what was to become fairway number one and two as well as part of number three (present woods nine) when one of the local politicians came up with a program whereby grants could be received for municipalities to build emergency landing fields.  The City then applied for and received the grant to build the golf course / landing field.  The property owners, golfers, donated the land to the County on October 29,1933 which then transferred it to the City of Whitefish on Jan. 15, 1934 with the stipulation that it would become a golf course for local golfers and double as an emergency landing strip.  This was accomplished in 1935 with the funding coming via the WPA, which also built the Log Clubhouse / terminal finishing that project in 1937. Brad Seeley, a civil engineer, came to Whitefish from Helena to approve the final project.

The Grand Opening Tournament was held on May 24, 1936.  The golfers paid off the purchase price of the land, bought equipment and fixtures for the Clubhouse by individual contributions as well as the sell of $25 personal bonds.The original Whitefish Lake Golf Association was formed on March 30, 1934 with a twenty-five cent annual membership paid.  D.P. Dedon was elected as the first president and Dallas Stocking served as the initial secretary of the new association.  The list of original members constitutes a virtual who’s who in whitefish history, with names like; L.A. Muldown, E.M. Hutchinson, Rusty Abell, R.H. Sloan, Ira Kell, R.F. Haines, John Lockridge, Dr. McClench, Charles Weller, K.B.Tate Clark Forcum, Chas Tarr, Claude Brittlell, Mr. Trippett, Louise Abell, and others as well.  The Golf Association hired the first golf professional, Fred Hall, who helped finish the construction of the course as designed by Bill Trippett.

The City of Whitefish began operating the golf course, incurred debt and lost money at the same time.  In the 1940’s the City considered closing the golf course, when local golfers incorporated the Whitefish Golf Lake Golf Association and leased the course from the City and also assumed the debt.  From that time until the present the Whitefish Lake Golf Association has operated the course on a not for profit or break even basis.

In the 1950’s the WLGA felt the need to expand the facility, and once again the Association bought the adjoining property necessary to add the Lake Nine. 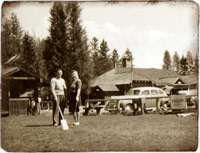 Dr. Don Brown and Brad Seeley arranged for the purchase of the land for $8,400 which were to be the additional nine holes.  The land and the course development were paid for by the WLGA through personal loans from members and selling 10-year memberships. Whitney Smith was the chairman of the Lake Nine development project for the association with Roy Owens, Sterling Rygg, Mel Lane, Herb Peschel Sr. and H.O. Swisher serving on the committee.  This property was developed during the early 1960’s, becoming an eighteen-hole course, which became very popular throughout the Northwest.  Mr. G.A. MacMillan of Helena was hired to design the new addition that allowed the development to take place while play continued on the original nine.   Most of the development work was done via volunteer workers and donated equipment but still cost the association nearly $70,000 to complete. Numerous young golfers earned golf privileges by picking rocks off the fairways.  In 1964 the Golf Association purchased the original driving range for $7,000, that land is now part the site of Grouse Mountain Lodge. 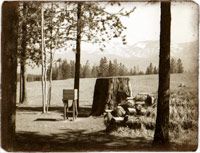 As the popularity of the 18-hole course grew the WLGA began to look for ways to update the hand operated irrigation system to one that was automated.  In 1973-74, matching Federal grants became available from the Bureau of Land Management and Recreation, whereby an agreement to donate the Lake Nine (LOT 4) to the City of Whitefish was reached that enabled the WLGA to upgrade the irrigation system.  This agreement called for the continued use of the property exclusively for golf with preference given to local golfers. In addition, the Whitefish Lake Golf Association helped the development of City Park property across the highway spending $17,000 for tennis courts and helped with the soccer fields.

With the continued growth of golf in Whitefish the existing 18-hole course was soon operating at near capacity.  The population was growing with demand for golf exceeding availability in Western Montana, so a group of local entrepreneurs bought property south of Highway 93 across from the existing course.  This group, Grouse Mountain Development and headed by Tim Gratton, built additional nine holes that was called the Mountain Nine and completed in the early 1980’s.  The Grouse Mountain Development principals leased the completed nine holes to the Whitefish Lake Golf Association for one dollar per year for 75 years with a renewable option with the same terms.  The property was covered by covenants that state the only use of the land will be for golf course operation, with WLGA assuming all responsibility for maintenance and taxes and all other operating costs.  Throughout the 1980’s the course operated as a 27-hole facility.  Also in the early eighties another group of golfers expressed to the Board that additional property was available to build another nine holes to make Whitefish Lake Golf Course a 36-hole facility.  The Board declined to exercise that option from Walt Nussbaum and Don Jensen due to a perceived lack of need.

The Association did however; feel that a needed upgrade or remodel of the original 18 holes (North Course) was due to occur.  Golf course Architect, John Steidel was hired and the remodel was accomplished in 1983 for the Woods Nine and 1985 for the Lake Nine at a cost of nearly $750,000.  The move proved extremely popular with the members and green fee players to the extreme that often in order to obtain tee times two days in advance a player would need to be in line by 4:30 A.M. It was then in the late 1980’s that the WLGA Board of Directors began the acquisition of land to add another nine holes to form the South Course.  Dick Maddux and Jim Welch were very instrumental in the coordination of the seven different parcels obtained to build the additional nine holes.  The South Course development took four years to be built, grow in and finally open in June of 1994.  The total cost of the additional nine holes and remodel of the now incorporated Mountain Nine was $1,200,000.  Golf Architect John Steidel was again engaged to design the addition and remodel phases of the expansion project. 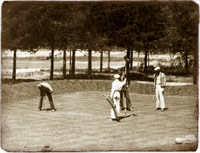 Unfortunately, five of the wettest years in history occurred during the early 1990’s and sections of the South Course were flooded beyond playability in April of 1996. The WLGA returned to the various agencies for permits in order to reclaim the flooded property.  Raising the entire area adjacent to Lost Coon Lake by over 4 feet and rebuilding the affected fairways, greens and tees costing another $400,000 to re-open the course in July of 1998.

In 2003 Tim and Darlene Grattan graciously donated the original Mountain Nine property to the Whitefish Lake Golf Association placing full ownership of the South Course into the hands of the Association.

Throughout all of the time it has taken to build the Whitefish Lake Golf Course into the only 36-hole complex in Montana, the Golf Association and their Board of Directors, have always operated on a volunteer basis.  All of the monies generated from the operations have been put back into course improvement, equipment, other capital expenses or paid out to the City of Whitefish as Lease payments.  The goal of the Association is to continue it’s cooperative relationship with the City of Whitefish, while maintaining the highest quality golf facility at an affordable price for local golfers.  A by product of the all this growth and development of golf opportunity is the attraction of tourists to our area to play our golf course and take advantage of other attractions in the area.

January 22, 1999 the WLGA and the City of Whitefish entered into a new lease for 20 years whereby the WLGA will continue to manage the golf course facility. 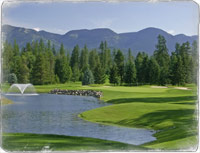 In 1999 the WLGA obtained financing to restore / renovate the log clubhouse recreating as near as possible the original ambiance of the facility. The cost of the renovation was just over $500,000 including a completely new kitchen and upgrades to the Golf Shop.

In 2005 the WLGA completely remodeled hole number 2 of the North Course with new tees and green.

Other major improvements include the new driving range facility (netting, poles, target greens, tee area and sodding the entire 5 acres in 2007.  The totally new outside services center and deck were added in 2008 to better accommodate the increase in utilization at the restaurant and course combined.